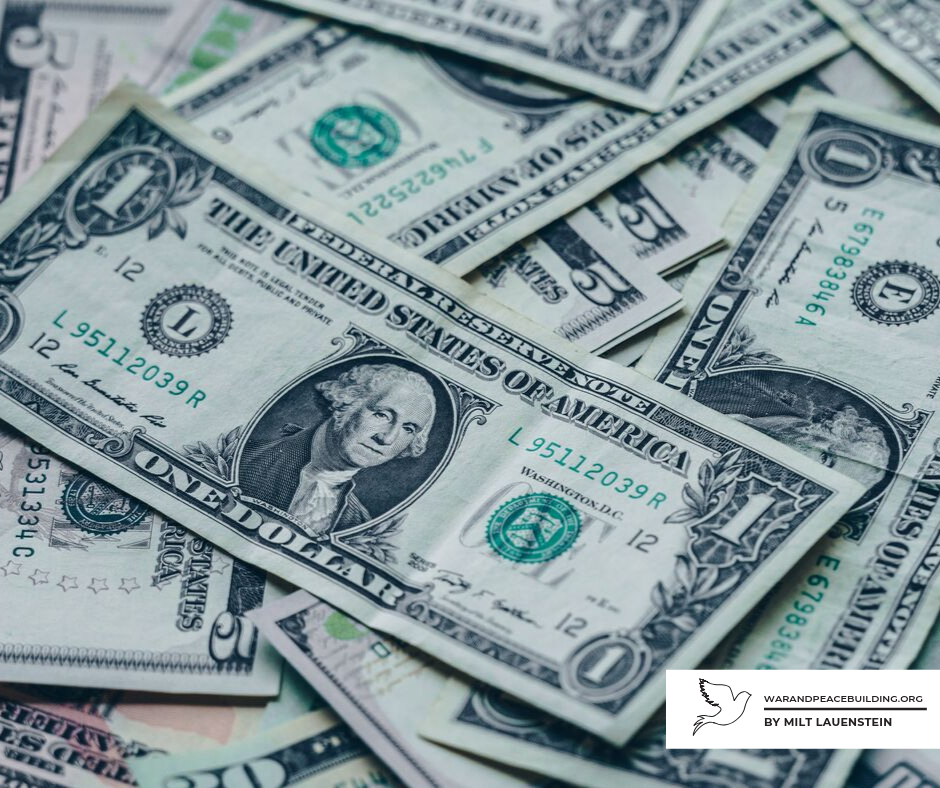 Cost-effectiveness in determining what to fund?

In 2001, in my mid-70s, I retired from a career in business management and decided to do what I could to reduce armed conflict in the world.

Having lived through the devastation caused by World War II and the Korean and Vietnam Wars, I believed that two major causes of human suffering were disease and war. In 2001, the Gates Foundation and others were already directing enormous financial resources at disease prevention and cure.  Impressive progress was being made. However, the resources dedicated to reducing armed conflict were not achieving similar success. The idea of groups of people trying to kill each other seemed so illogical that I adopted the prevention of war as my philanthropic focus.

Humans have some proclivity towards violence, but most people, most of the time, demonstrate that they are capable of living together peacefully. Still, the amount of money devoted to preventing wars has not been adequate to prevent widespread organized violence and the consequent suffering of millions of people. Adding my bit to the effort seemed like the best thing I could do in retirement.

Since I had no background in the field, I sought to learn about peacebuilding. I needed to know where my effort and money would do the most good. I read hundreds of books and reports, attended conferences, and consulted with leaders in the field. From examples cited in Mary Anderson’s book, Do No Harm, published in 1999 to 2014’s Peaceland, by Severine Autesserre, I became acutely aware that many efforts to reduce armed conflict were ineffective or worse, counterproductive.

In searching for ways to make a meaningful financial contribution, I looked for data showing the relative cost-effectiveness of various approaches to peacebuilding, as I would have done when making decisions as a corporate CEO. I found nothing. With no hard evidence of where effort and money would do the most good, the allocation of resources to reducing violent conflict seemed to be based primarily on what sounded good. That really bothered me!

Ultimately, in deciding where to dedicate my modest funds, I acted on what I believed to be sound advice and what I personally observed: that individuals and communities local to conflict and war were in the best position to determine ways forward to peace. With some encouragement and a little support, they could make a positive difference. As a “test case”, I funded a locally-led project in Guinea Bisseau to prevent a national election from plunging the country back into civil war. That project was successful and today the country maintains a fragile peace. That funding experience led to the 2011 formation of the Purdue Peace Project, which supports locally-led violence prevention efforts in West Africa and Central America. Local prevention is proving to be highly cost-effective.

However, the larger question remains: how do different approaches to peacebuilding compare in cost-effectiveness? Reliable data on the relative cost-effectiveness of different peacebuilding approaches would encourage funders to shift resources from approaches that accomplish little, to those with more promise. The funds spent by governments, foundations, and philanthropists to promote peace is minimal compared to the costs of preparing for and conducting warfare, so isn’t it even more vital to spend our limited funds wisely? If funders had information based on rigorous research as to where their money would do the most good, they would be able to increase the effectiveness of peacebuilding.

Despite these genuine concerns, research is needed as a great deal is at stake. Currently an estimated 60 million people have been displaced from their homes by war. Armed conflict has destabilized the Middle East. The resulting refugee problem is threatening the stability of Europe. We must find ways to be more effective in making and keeping peace.

One organization that has recognized the need for research on the cost-effectiveness of peacebuilding activities is the Institute for Economics and Peace (IEP) whose Global Peace Index is widely recognized for its rigorous research on the relative peacefulness of the nations of the world. Together with IEP, I am co-funding an initial study into the cost- effectiveness of various peacebuilding activities. We see this as an ongoing activity with a widely disseminated annual report, the first one to be issued late this year.

As other funders see the progress being made to address cost-effectiveness I believe they will appreciate the value of information on how best to allocate resources and sponsor similar research.  And there is an important role for academia here: university research departments could contribute a great deal to world peace through taking on the challenge of understanding peacebulding cost-effectiveness.

Data on the relative cost-effectiveness of peacebuilding approaches will not only lead to a better allocation of resources but will also help justify spending money to prevent wars. The combination of more money better spent will contribute to making the world a more peaceful place. I hope others will join me in this effort.